You are here: Home1 / Growing Cocoa

Origins Of Cocoa And Its Spread Around The World

The genus Theobroma (or “food of the gods” in Greek) originated millions of years ago in South America, to the east of the Andes. Theobroma has been divided into twenty-two species of which T. cacao is the most widely known. Recent archaeological evidence found in Southern Ecuador indicate that cocoa beans were already used more than 5,300 years ago by native population and that, 1,500 years before the domestication of the tree. Since then, the seeds of T. cacao had been used by several pre-Colombian civilizations including the Maya (covering among the current Mexico, Guatemala and Honduras), the Incas (covering the current Peru, Ecuador, Colombia and Bolivia) and the Aztecs (covering the current Southern Mexico). Cocoa beans were used by pre-Colombian civilizations as food ingredient (for beverage, mixed with corn flour and spices), but also as a currency for trade or for ritual behaviour.

The first outsider to drink chocolate was Christopher Columbus, who reached Nicaragua in 1502 searching for a sea route to the spices of the East. But it was Hernan Cortés, leader of an expedition in 1519 to the Aztec empire, who returned to Spain in 1528 bearing the Aztec recipe for xocoatl (chocolate drink) with him. The drink was initially received unenthusiastically and it was not until sugar was added that it became a popular drink in the Spanish courts and gradually in other European courts. In order to meet European growing demand, cocoa cultivation was slowly extended during the colonization period to the three main current cocoa producing areas detailed below: Asia, Africa and Latin America and the Caribbean. 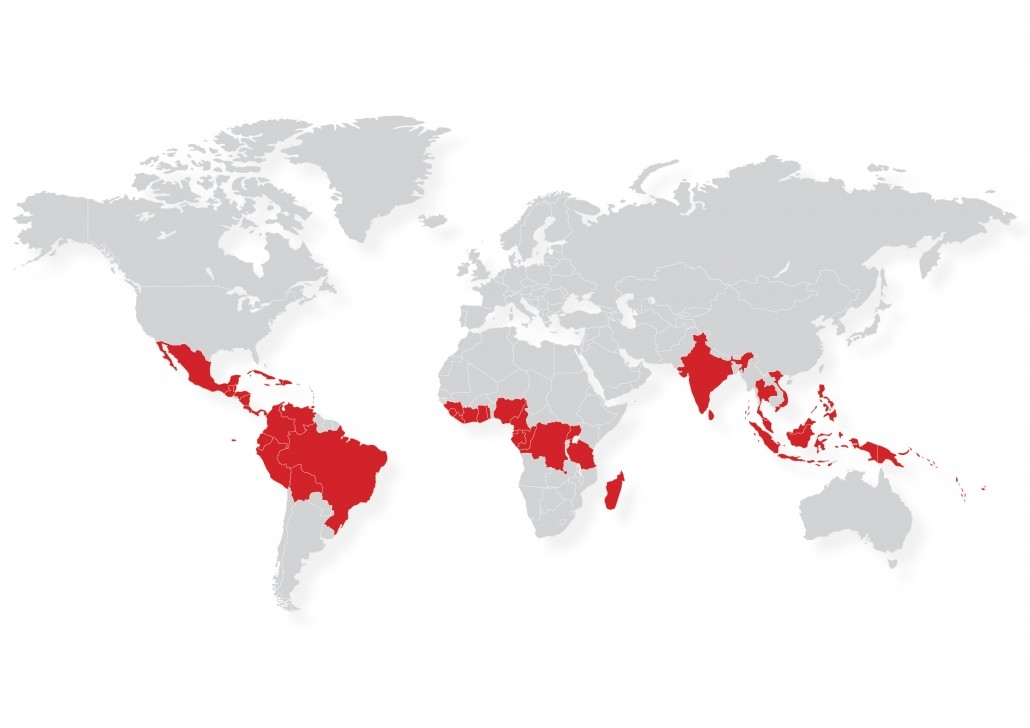 There were attempts to satisfy Spanish domestic demand by planting cacao in Spanish territories like the Dominican Republic, Trinidad and Haiti but these initially came to nothing. More successful were the Spanish Capuchin friars, who grew criollo cacao in Ecuador in about 1635. The rush by European mercantile nations to claim land to cultivate cacao began in earnest in the late seventeenth century. France introduced cacao to Martinique and St Lucia (1660), the Dominican Republic (1665), Brazil (1677), the Guianas (1684) and Grenada (1714); England had cacao growing in Jamaica by 1670; and, prior to this, the Dutch had taken over plantations in Curaçao when they seized the island in 1620.

The explosion in demand brought about by chocolate’s affordability required yet more cacao to be cultivated. Amelonado cacao from Brazil was planted in Principe in 1822, Sao Tomé in 1830 and Fernando Po in 1854, then in Nigeria in 1874 and Ghana in 1879. There was already a small plantation in Bonny, eastern Nigeria established by Chief Iboningi in 1847, as well as other plantations run by the Coker family and established by the Christian missions. The seeds planted in Ghana were brought from Fernando Po by Tetteh Quarshie or his apprentice Adjah, after previous attempts by the Dutch (1815) and the Swiss (1843) to introduce cocoa in Ghana had failed. In Cameroon, cocoa was introduced during the colonial period of 1925 to 1939.

As for the other cocoa growing areas, cocoa cultivation was introduced in Asia during the colonisation period. The first trees were introduced in Indonesia by the Spanish in the XVI century. Meanwhile, it took until 1970 for the cocoa sector to be developed at significative stage in Asia, in particular in Indonesia, Malaysia, Papua New Guinea, and on a smaller scale in Philippines, Vietnam, Thailand, Myanmar, Laos and Cambodia.

Where is Cocoa Produced ?

Cocoa is produced in countries in a belt between 10ºN and 10ºS of the Equator, where the climate is appropriate for growing cocoa trees. The three current largest producing countries are Côte d’Ivoire, Ghana and Ecuador.

The natural habitat of the cocoa tree is in the lower storey of the evergreen rainforest, and climatic factors, particularly temperature and rainfall, are important in encouraging optimum growth.

Cocoa plants respond well to relatively high temperatures, with a maximum annual average of 30 – 32ºC and a minimum average of 18 – 21ºC.

Variations in the yield of cocoa trees from year to year are affected more by rainfall than by any other climatic factor. Trees are very sensitive to a soil water deficiency. Rainfall should be plentiful and well distributed through the year. An annual rainfall level of between 1,500mm and 2,000mm is generally preferred. Dry spells, where rainfall is less than 100mm per month, should not exceed three months.

A hot and humid atmosphere is essential for the optimum development of cocoa trees. In cocoa producing countries, relative humidity is generally high: often as much as 100% during the day, falling to 70-80% during the night.

The cocoa tree will make optimum use of any light available and traditionally has been grown under shade. Its natural environment is the Amazonian forest which provides natural shade trees. Shading is indispensable in a cocoa tree’s early years.

Cocoa is grown in a wide variety of soil types.

Cocoa needs a soil containing coarse particles and with a reasonable quantity of nutrients, to a depth of 1.5m to allow the development of a good root system. Below that level it is desirable not to have impermeable material, so that excess water can drain away. Cocoa will withstand waterlogging for short periods, but excess water should not linger. The cocoa tree is sensitive to a lack of water, so the soil must have both water retention properties and good drainage.

The chemical properties of the topsoil are most important, as the plant has a large number of roots for absorbing nutrients. Cocoa can grow in soils with a pH in the range of 5.0-7.5. It can therefore cope with both acid and alkaline soil, but excessive acidity (pH 4.0 and below) or alkalinity (pH 8.0 and above) must be avoided. Cocoa is tolerant of acid soils, provided the nutrient content is high enough. The soil should also have a high content of organic matter: 3.5% in the top 15 centimetres of soil. Soils for cocoa must have certain anionic and cationic balances. Exchangeable bases in the soil should amount to at least 35% of the total cation exchange capacity (CEC), otherwise nutritional problems are likely. The optimum total nitrogen / total phosphorus ratio should be around 1.5.

Criollos dominated the market until the middle of the eighteenth century, but today only a few, if any, pure Criollo trees remain.

Forastero is a large group containing cultivated, semi-wild and wild populations of which the Amelonado populations are the most extensively planted. Large areas of Brazil and West Africa are planted with Amelonado. Amelonado varieties include Comum in Brazil, West African Amelonado in Africa, Cacao Nacional in Ecuador and Matina or Ceylan in Costa Rica and Mexico. Recently large plantations throughout the world have used Upper Amazon hybrids.

The Trinitario populations are considered to belong to the Forasteros, although they are descended from a cross between Criollo and Forastero. Trinitario planting started in Trinidad, spread to Venezuela and then to Ecuador, Cameroon, Samoa, Sri Lanka, Java and Papua New Guinea.

Disclaimer : the map solely intends to provide a broad indication of the geographical distribution of the main cocoa varieties based on historical perspective. The data presented on this map has been compiled to represent the predominant cocoa varieties by location and without exclusivity. Sub-categories may exist within each geographical area. This map targets the general public and does not purport to represent the complexities of cocoa genetics and ongoing classification and mapping works worldwide. 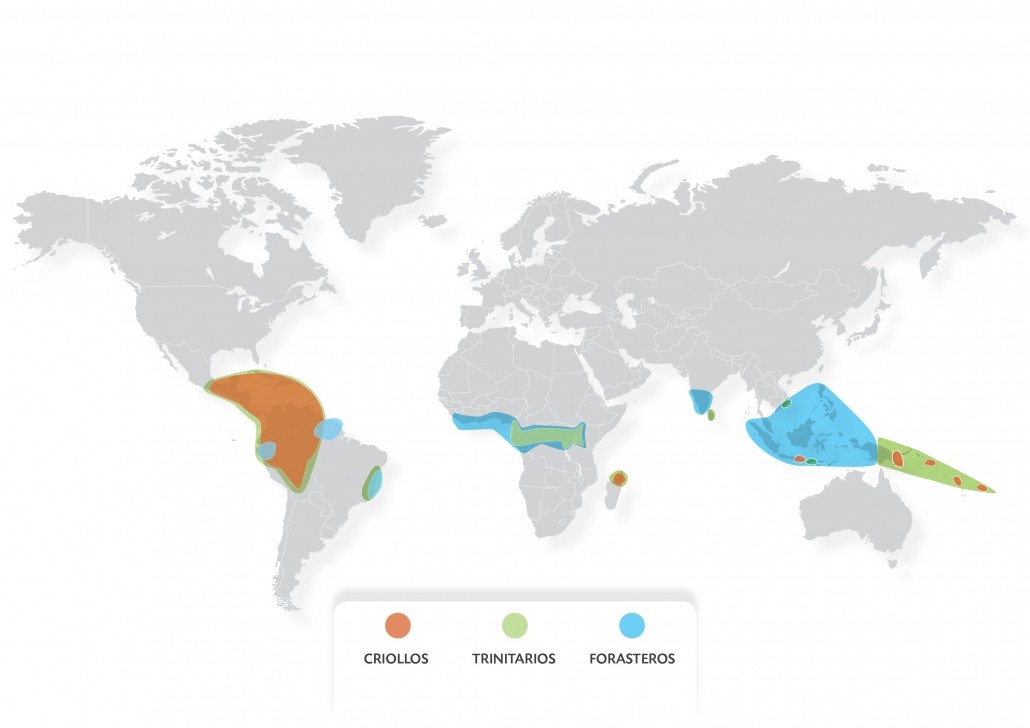 Cocoa is raised from seed. Seeds will germinate and produce good plants when taken from pods not more than 15 days underripe.

Tree cuttings are taken with between two and five leaves and one or two buds. The leaves are cut in half and the cutting placed in a pot under polyethylene until roots begin to grow.

A bud is cut from a tree and placed under a flap of bark on another tree. The budding patch is then bound with raffia and waxed tape of clear plastic to prevent moisture loss. When the bud is growing, the old tree above it is cut off.

A strip of bark is removed from a branch and the area covered in sawdust and a polyethylene sheet. The area will produce roots and the branch can then be chopped off and planted.

There are, however, known exceptions to this generalisation. Nacional trees in Ecuador, considered to be Forastero-type trees, produce fine or flavour cocoa. On the other hand, Cameroon cocoa beans, produced by Trinitario-type trees and whose cocoa powder has a distinct and sought-after red colour, are classified as bulk cocoa beans.

The share of fine or flavour cocoa in the total world production of cocoa beans is just under 5% per annum.