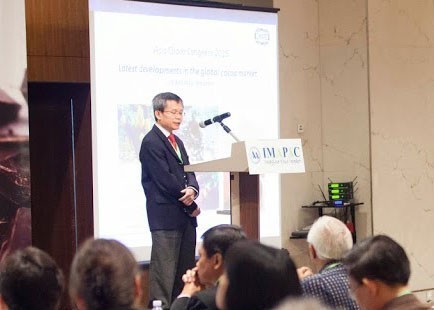 The ICCO stressed the importance of sustainability and innovation at the opening session of the Asia Choco Cocoa Congress, held in late April in Singapore.

Speaking on behalf of the Organization, Senior Economist Mr. Loke Fong Han emphasised the interdependence of all stakeholders and the fact that each component in the chain is vital to the future sustainability of the cocoa sector.

He advocated better coordination of initiatives and national policies, and increasing crop and farm diversification in his presentations. Improving quality and branding cocoa origins were steps leading to increased value for cocoa bean production, he said, and would help producing countries and their farmers to move up the chain rather than merely producing beans for export.

Mr. Han also reconfirmed the ICCO’s position that the widely publicised fear of a major upcoming cocoa shortage was seriously overstated, and presented some of the Organization’s forecasts for supply and demand of cocoa in the next few years.

The ICCO was a supporter of the Asian Choco Cocoa Congress, which drew participants from around the Asian cocoa producing region.