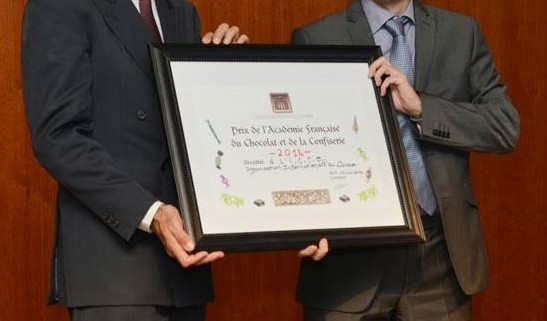 London, 23 May 2014 — The International Cocoa Organization in mid-May was presented with the 2014 grand prize of the Academie Française du Chocolat et de la Confiserie (the French Chocolate and Confectionery Academy).

At a ceremony held in Paris on 13 May, Academy president Xavier Conraux presented this year’s prize to the ICCO’s Director of Economics Laurent Pipitone.

The Academy, which comprises 40 elected members from a number of fields linked by a love and concern for chocolate and confectionery, presents its award annually to individuals and organizations that have assisted in the advance of standards in these areas.

The Academy said that the awarding of the prize recognised the work of the ICCO over many years, and in particular praised the Organization’s creation of the World Cocoa and Chocolate Day, which takes place annually on 1 October.

World Cocoa and Chocolate Day was established to draw public attention to the contribution of cocoa producers in the chocolate industry chain.

The especially dedicated day was initiated as the result of a decision by the members of the International Cocoa Council at their meeting in Berlin in 2008.