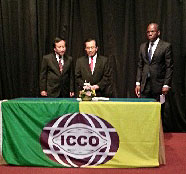 Indonesian Agriculture Minister Dr H Suswono used the occasion of the 87th meetings of the International Cocoa Council, to sign the Declaration, making Indonesia the 32nd stakeholder to do so. The Council and subsidiary body meetings are being hosted this week in Bali by the government of Indonesia.

Indonesia joins stakeholders ranging from cocoa growers through their governments to civil society and most of the world’s largest manufacturers of chocolate, all of whom began the signing of the ground-breaking agreement at a special ceremony during the World Cocoa Conference in Abidjan in November. The Declaration remains open to allow more cocoa stakeholder organizations to sign it.

The Abidjan Cocoa Declaration, which recommends specific and measurable actions to achieve a sustainable cocoa economy, reflects the more detailed proposals of the Global Cocoa Agenda. The important issues highlighted by the Agenda formed the basis of many of the presentations, discussions and panel sessions that took place at the World Cocoa Conference.

The Declaration is to be the first step in an ongoing process aimed at creating a sustainable future for the cocoa sector and helping to ensure that its benefits are shared along the entire chain, starting with the growers. Another World Cocoa Conference is planned in 2014 to monitor and review the progress made dealing with the issues outlined by the Declaration and the Agenda.

The texts of both the Abidjan Cocoa Declaration and the Global Cocoa Agenda, as well as most of the presentations that were delivered at the World Cocoa Conference, can be downloaded here.