News
You are here: Home1 / News2 / Latest News3 / Report on the 88th Meetings of the International Cocoa Council and subsidiary... 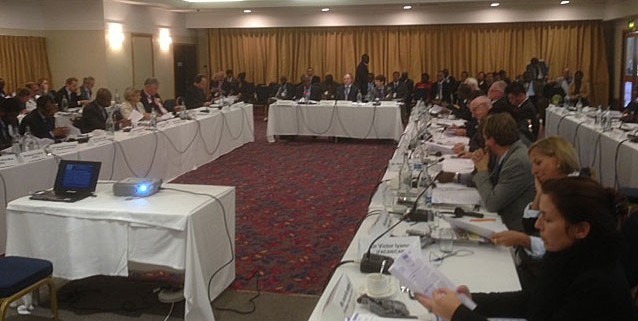 At a press conference immediately after the meetings, the ICCO’s Executive Director, Dr Jean-Marc Anga, presented a review of the outcome of the 88th session of the International Cocoa Council, held at the Holiday Inn, Wembley, London, 23-27 September 2013:

Ladies and Gentlemen, welcome to the final day of the 88th session of the International Cocoa Council and its subsidiary bodies, where we have just concluded a wide-ranging and very well-attended meeting, including the expanded Consultative Board on the World Cocoa Economy.

We were pleased this week to have our meetings graced with the presence of Ministers, Ambassadors and High Commissioners representing our member countries.

We are coming to the end of the first year of the International Cocoa Agreement 2010, which first came into force on 1 October 2012. I was pleased to be able to report that Ecuador, has now officially joined the Agreement, bringing the number of member countries of the Organization up to 46. With a number of other countries on the point of joining as well, we are quite confident that the number of member countries under the Agreement will exceed 50 before the end of the new cocoa year.

This week the first meeting of the Consultative Board on the World Cocoa Economy took place in its expanded form, as agreed by the Council at its previous meeting in March 2013 in Bali, Indonesia. This Consultative Board now includes representatives from across the spectrum of the cocoa and chocolate industry, NGOs, suppliers to the industry and ancillary businesses related to cocoa. We had a good first meeting of this expanded group, and they are tackling a number of important issues under the auspices of the Council.

After the great success of the first World Cocoa Conference, held in Abidjan, Côte d’Ivoire last November, we were able to report to the Council that plans are well in hand for the second edition of the Conference, to take place in Amsterdam from 9 – 13 June 2014. This event will review the progress made towards achieving the development goals set out in the Global Cocoa Agenda and agreed by all major stakeholders, for the sustainable future of the industry. We will also be addressing significant issues in the Conference content, including achieving remunerative prices and improved livelihoods for cocoa farmers by 2020. The latest details of the World Cocoa Conference 2014 are in a new brochure that has just been published.

We were able to report to the Council as well on the success of two other capacity building meetings held in member countries in the past few months—the International Workshop on Cocoa Certification held in Douala, Cameroon in June, and the International Seminar on Cocoa Terminal Markets and Econometric Modelling of the Cocoa Market, which took place in Guayaquil, Ecuador in July. The certification workshop brought together over 130 experts and stakeholders together to debate this important issue, while the seminar on cocoa terminal markets is now planned to be repeated in both Africa and Indonesia.

Among the projects we introduced to the Council is a new one called CocoaSafe, to take place in Indonesia, Malaysia and Papua New Guinea, and which will aim to help smallholder producers and exporters improve their cocoa in order to consistently meet international food safety and SPS standards.

Closer to home, we were able to report on a smooth move into the Secretariat’s new offices at Westgate House in Ealing, West London, a move that will save the Organization significant outlay in rent, and will help the Organization achieve a zero-growth budget for the upcoming two years. These premises will serve us well until the agreed September 2015 date for a Council decision on whether the headquarters of the Organization will be relocated to Abidjan.

The ICCO last week published for the first time in six years its World Cocoa Directory, which we were able to introduce to the Council. The 2013/14 edition has been completely revised and updated, and it will soon be available in digital form as well, on the ICCO website.

We also discussed in the Council the organization of an ICCO delegation to China, in order to establish stronger links with the industry there, and of course to solicit China’s membership in the Organization. We feel that the potential cocoa market in China is very significant, and its closer participation in the work of the Organization can only be beneficial to the entire cocoa value chain. We were pleased to welcome representatives of the government of the People’s Republic of China to our meetings this week.

The following presentations from the meetings are available to download:

Presentation on Activity-based budgeting, given by Mr. Michael Mann, EU Consultant (presentation to  the Council);

Presentation on Sustainable Certification given by Mr. Christopher Wunderlich, Co-ordinator of the United Nations Forum on Sustainability Standards (UNFSS) (presented to the Economics Committee);

National Cocoa Development Plan presentations to the Consultative Board on the World Cocoa Economy, given by the Governments of